The Yoquivo Mining District is located in the state of Chihuahua in the heart of the Sierra Madre Gold Belt of Mexico. West Times Yoquivo project covers the entirety of the historic Yoquivo District including the formerly producing San Francisco Mine. 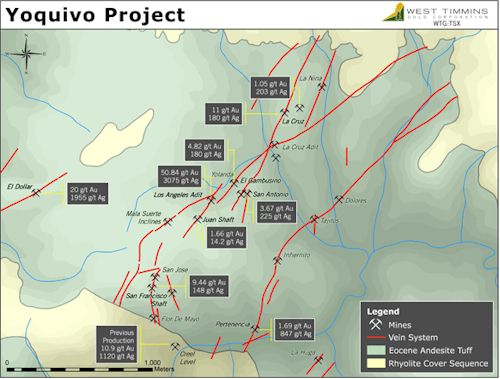 The San Francisco Mine was developed at the southern end of an extensive epithermal gold-silver system which can be traced on surface for over 3 kilometres within the heart of the Yoquivo Project. Seven sub-parallel, structurally controlled vein systems are known within the mineralized trend which exhibits a number of similarities to the nearby Ocampo District. Gammon Lake Resources recently brought the Ocampo Deposit into production.
The Yoquivo District was consolidated by Sydney Resource Corp. in 2004. The core holdings in the district including San Francisco Mine Property has been held by the same private group since 1956 and the district has never been subject to modern exploration techniques or drill testing. The project vendor maintains a small (75-100 tonne per day) mill facility on the property which he has operated intermittently to recover high-grade ore shoots from the underground workings at San Francisco which are largely accessible through work by the vendor and Sydney.

Initial geological mapping by Sydney has identified 30 mineralized centers on the Yoquivo project with grab sample grades ranging from < 1 g/t Au to over 50 g/t Au from the Los Angeles adit area which also returned silver grades of 3075 g/t. Subject to an Option Agreement dated May 31, 2006 Konigsberg may earn an initial 50% interest in the Yoquivo Project by making cash payments of US $200,000, issuing to West Times 1,000,000 common shares of Konigsberg, funding US $1,000,000 U.S. in exploration expenditures on the property over a 24 month period and making all cash payments required by West Times to the underlying property vendor. West Times is the operator of the Yoquivo Project.

Seven sub-parallel epithermal vein/breccia systems are known within the Yoquivo District which can be traced across the property over a distance of over 3.0 kilometres and which define a mineralized corridor in excess of 1000 metres wide.

Historical records and recent observations indicated bonanza gold and silver grades occur in steeply dipping shoots in the footwall to NE trending structures characterized by lower-grade gold-silver mineralization. Recent mapping suggests the highest grade shoots are developed at the intersection of structural trends and exhibit vertical zonation in metal content. Gold-silver mineralization is associated with the base metal sulphide mineralization both in discrete veins and in breccia bodies.

Extensive high-level epithermal system with multiple mineralized centres
Previous production grades of 10.9 g/t Au and 1120 g/t Ag are indicative of bonanza grades observed to date
Large property position (25 square kilometres) covers the entirety of the Yoquivo District
Exploration funded by third party under the direction of West Times technical team
Located in the heart of the Sierra Madre trend in close proximity to a number of high-profile advanced exploration projects including the Ocampo Project which has recently entered production
Project enjoys road access, re-habilitated underground workings and has a small function mill located on site
Mineralization may extend, underneath young cover both the Northeast and Southwest
West Times has an option to earn 100% ownership of the project subject to it’s recent option agreement with Konigsberg Corporation.
Undergoing active exploration

As indicated above the San Francisco Mine saw production from high-grade shoots in the Esperenza and San Francisco veins between 1908 and 1925.

The property was acquired by the current vendor in 1956.