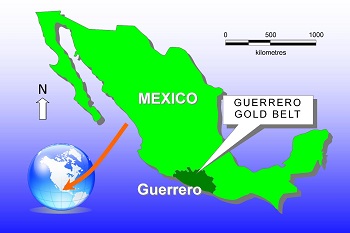 • Major land position (440 square kilometres) in a belt where large land positions are held by Goldcorp, Teck-Cominco, Newmont and Penoles.

• Gold in stream sediment anomalies collected by the Mexican geological survey are considerably higher within the project area than in proximity to the known gold deposits to the north.
Mineralization:

Several occurrences of magnetite, copper-magnetite skarn are reported within the project area. In addition a number of gold-silver and silver-lead veins systems are also reported in maps and compilations produced by the Consejo.

Crews are currently conducting a more detailed stream sediment sampling program of the project area and examining the known mineral occurrences on the property.